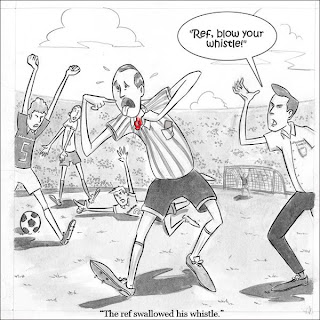 OK, Sepp Blatter. Dust off your personal collection of Red Cards and start booking some of the bumbling blokes you assembled to referee in this year’s World Cup.
Red Card all the refs responsible for their awful officiating in South Africa…which was about as predictable as the flight of a Jubalani soccer ball.
Kick off (pun intended) the purging process by poking a gigantic Red Card under the nose of Howard Webb – the chap you chose to officiate yesterday’s plodding championship game between Spain and the Netherlands.
Who cares if Howard Webb was the best the English premiere league had to offer? So what if he issued 13 Yellow Cards and one Red Card during Spain’s 1 – 0 victory over The Netherlands in extra time.
There should never have been any extra time . . . thanks to Howie.
Oranje fans will never forgive this English ref for failing to book Spanish defender Carles Puyol in the waning moments of the match. Puyol grabbed fleet-footed Arjen Robben just outside the penalty area during the Dutch striker’s unobstructed path to the net.
Surprisingly, the Yellow Card Happy Howie inexplicably swallowed his whistle on this game-altering play. Howie allowed the action to continue unabated as Puyol improperly impeded Robben’s impending goal scoring run. Regulation time soon expired, and the Spaniards marched on to win the title in extra time . . . thanks to Howie’s inconsistent officiating.
Howard Webb may have missed this now infamous infraction. However, 700 million ESPN viewers from around the globe certainly saw it in stunning HDTV either in the luxury of their living rooms or while chugging a beer in their favorite pub.
Here’s hoping Sepp Blatter exhausts his personal collection of Red Cards on the woeful refs responsible for careless calls in South Africa. And, finally, before we samba on down to Rio for World Cup 2014, here’s hoping Sepp Blatter Heimlichs any refs content on choking on their whistles . . . instead of blowing them.
MIKE – Thee American Made Voice on Sports!
http://www.facebook.com/theemikefans