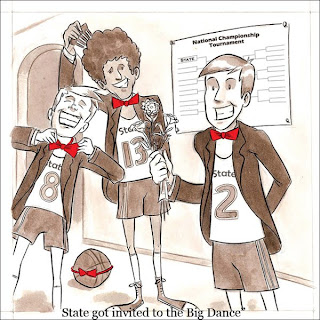 With swift and unapologetic fury, the same sickness attacks me every March.
Rendering me nearly powerless, this early Spring malaise – far worse than any cold, virus or flu -devours my energy, cripples my logical thinking and negates any thought of normality in my life for nearly 30 days.
This month the same invisible power has wielded its ugly head and smitten me once again. In the past family, friends and colleagues pleaded with me to seek a cure for the insanity this unseen force wreaks in my life during March.
Reluctantly, I followed their beckoning calls and sought professional care. Eager to help, these experts offered little hope for recovery while others lamented that I simply didn’t want to be cured.
Neurologists from John Hopkins Medical Center diagnosed severe, but not terminal, brain abnormalities. Psychiatrists and sociologists from the University of California at Berkeley detected extreme shifts in emotion coupled with rabid anti-social behavior. Even celebrated theologians from the Vatican speculated about some overpowering spirit requiring an exorcism.
However, two budding Bracketologists out of Bloomington, Indiana diagnosed my condition immediately. These pimply faced, 15-year-olds instantly recognized my symptoms and pinpointed my acute abnormality.
Why? Because they, too, experience the same condition every Spring. Their revelation mystified medical experts and stupefied both theologians and behavioral scientists alike, yet their simple findings brought me a major sigh of relief. Peace descended upon me instantaneously, soothing my soul to its core.
I know now what slays me every Spring and I relish – embrace – this sickness.
This Maddening Spring Sickness is also known as March Madness, and boy, did I catch another baaaaad case! But instead of prescribing drugs, recommending group therapy or offering up endless prayers, these kids from Indiana told me to enjoy the disease, allow the sickness to fully run its course and be grateful I was chosen to endure the illness.
More than that, these high schoolers recommended that I, by no means, attempt to hasten my recovery. They confidently assured me that this extreme malady would miraculously disappear by midnight EST the first Monday in April . . . as it faithfully does every year.
As further proof of their diagnosis, the same pubescent basketball junkies claim that my condition is no different than that of thousands of other cases. These boys shared similar stories of other Bracketologists beset by a strikingly similar springtime condition. As empirical proof, they cited cases popping up in Durham, NC; Lexington, KY; Spokane, WA; Lawrence, KS; and northeastern cities like Pittsburgh, Syracuse and Philly.
Again this year, major hot spots for the disease were coming from every conceivable socially-economically-geographically-racially-educationally unbiased demographics across the country.
Growing in intensity, this Maddening Spring Sickness is not only striking across the USA but also around the globe where fans are equipped with the proper satellite and Internet access. Roundball experts have cited the sickness as a worldwide epidemic, challenging the likes of the CDC and even the International Red Cross.
Yup! March Madness has once again gripped me, pulsating uncontrollably through my veins. Symptoms like sleep deprivation, strong bouts of euphoria, irrational guttural screams and obsessive-compulsive behavior have overtaken me. I’ll soon be uttering an endless array of scores, stats, pregame analysis and RPI ratings. I’ll even debate conference strength of schedules and prognosticate regional brackets.
Like a zombie, I’ll hypnotically trudge through mid-March and into early April never parting with my remote. I’ll divide my time between the big LCD screen on my TV, the smaller LCD screen on my WiFi notebook and the even smaller LCD screen on my iPhone. Forget about regular, normal relationships.
Like some co-dependent alien, I’ll only be able to communicate coherently with others who share the same physical and psychological condition. Sweating profusely and biting my nails incessantly, I’ll be texting and mumbling phrases like Sweet Sixteen; Another Cinderella Advances; Buzzer Beater; Raining 3’s; Diaper Dandy; Box Out; Shooting Out the Lights; and my personal favorite – Double Overtime Barn Burner!
Wow, what a sickness! I say, bring it on every March. Give me a double dose and don’t ever try to cure me.
Please don’t stop this March Madness. Don’t ever stop this Madness.
Thank you, young men from Bloomington, IN for diagnosing my condition.
I just love this disease.
Straight Talk. No Static.
MIKE – thee American Made Voice On Sports!
http:www.facebook.com/theemikefans