It recognizes the NFL, once again, for making A Crucial Catch its annual initiative to raise awareness of, or as its slogan aptly states, to intercept cancer.

The NFL’s Crucial Catch Campaign Continues Throughout October Each Year

The league’s A Crucial Catch campaign continues through out the month, and football fans need to acknowledge the NFL, teams, players and the NFL Players Association for their support of this critical cause each October.

Media and fans have been quick to criticize the NFL for the botched manner in which it has handled some of the egregious as well as convoluted off-field incidents of its players over the past few years.

Despite many valid criticisms, the NFL needs to be recognized for the positive social message it annually evangelizes on behalf of the American Cancer Society with its A Crucial Catch marketing campaign.

Since 2009, the NFL has designated October as Cancer Awareness Month and has actively promoted the distinct symbol of a pink ribbon entwined with its iconic league logo.

However, the great cancer awareness campaign has gotten even greater as it heralds awareness of pancreatic, pediatric and cervical cancers.

During the month, NFL players have been allowed to skirt the normally stringent NFL uniform standards by donning pink gloves, cleats and socks. The league has also sold officially licensed NFL pink merchandise and even auctioned off player gear to raise funds for cancer research.

Historically, by promoting the pink ribbon and encouraging players to wear pink apparel on the football field, the NFL has publicly, and admirably, promoted a most worthy social cause. The league even commissioned large pink ribbons to be stenciled on the 25 yard lines of each NFL field.

All 32 NFL teams have actively participate in this month long promotion.

Since its 2009 launch, the NFL estimates that the A Crucial Catch message has educated and screened 191,700 woemn for breast cancer while  raising more than $18.5 million.

And that’s awesome news from the NFL and better news for women living in under served communities.

The NFL Makes Positive Strides for Research to Intercept Cancer

Though the NFL has made positive strides in promoting awareness to intercept cancer with its A Crucial Catch campaign, the league can still do far more, not just with cancer education, but also with other serious social issues like domestic violence.

Also, with ubiquitous television coverage, the NFL can be a powerful force for awareness and change concerning the debilitating health issues that afflict far too many women in our society.

May the popularly accepted A Crucial Catch serve as the example of the an admirable public service campaign that the NFL has launched and serve as a harbinger for many more. To quote the empowering NFL slogan during this month, “Everyone can make a crucial catch.” 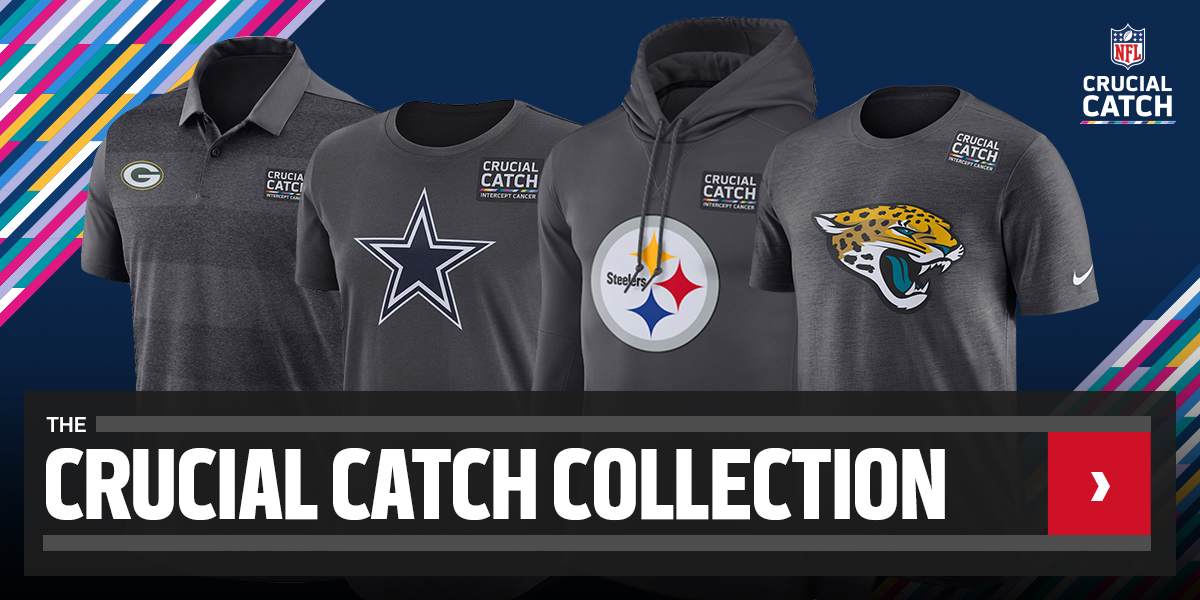 Please note that if you purchase any Crucial Catch merchandise from Fanatics, our site earns a small commission. So, thank you.